WIZnet’s WIZwiki-W7500 has officially become mbed- enabled after signing with ARM on June 1st and being introduced online at the ARM® mbed™ Developer website (https://developer.mbed.org/).

WIZnet designed W7500, a Cortex-M0 chip with TOE (TCP/IP Offload Engine), to penetrate further into the IoT market in 2015. WIZnet expects to play a more active role in the open-hardware community with the mbed™-enabled WIZwiki-W7500 board. 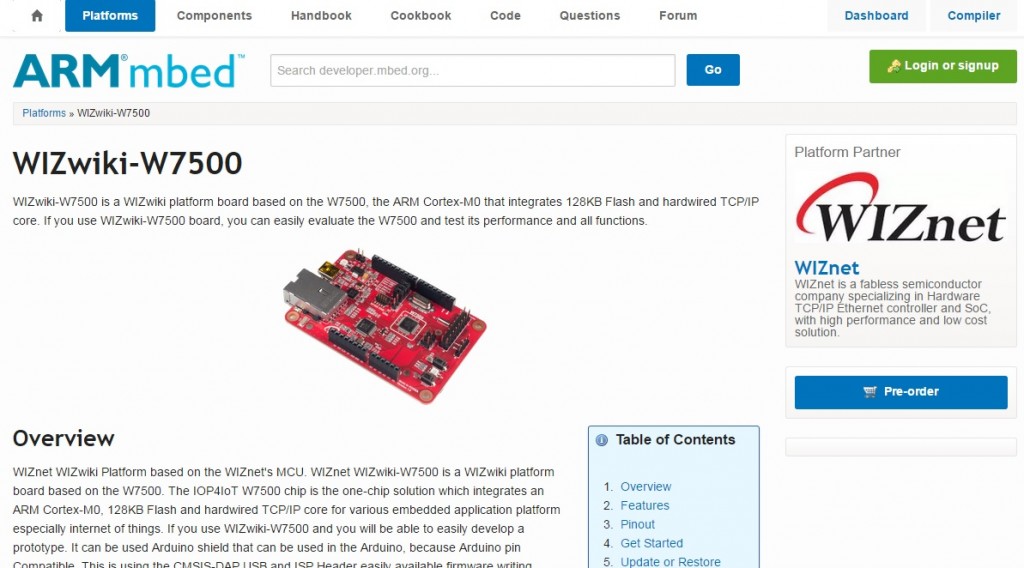 The ARM® mbed™ IoT Device Platform simplifies and speeds up the creation and deployment of Internet of Things (IoT) products. The platform is built around open standards and will bring Internet protocols, security, standards-based manageability and application data into one integrated solution optimized for energy and cost-constrained devices. It is supported by the established and expanding mbed hardware and software ecosystem that will provide common building blocks for IoT devices and services. This platform will accelerate the growth of the IoT by enabling innovators to focus on value-add features and differentiation.

Please Share This
Related Posts
.net Service and U World
It is known that it took more than a decade for 15% of Korea’s population…
WIZnet to Hold IoT Design Contest “Curation is Creation”
WIZnet, a member of the ARM® mbed™ Partnership, will hold an Internet of Things (IoT)…
Fabless ecosystem in the era of channel 2.0
On the entering of the Web 2.0 era, the center of power between manufacturers and…
Search
Follow Us